From rehab, Dragons' Den to two successful startups: Lizzy Hodcroft is a force to be reckoned with

“How can I say something that is impactful, and that’s also different? Basically, I just wanted to get naked on stage!”

I’m sat with Lizzy Hodcroft, 30, who’s chatting to me, on the grass outside Newcastle’s Boiler Shop. She’s just delivered a speech and a blooming inspiring one at that.

It’s the first day of Newcastle Startup Week, a five-day event dedicated to helping entrepreneurs find their place in the fast-paced world of startups and SMEs, through talks on everything from funding, tech and scaling up your business.

If there’s one thing that is instantly striking about Lizzy, it’s her red hair, despite it being combed into a loose bun on this incredibly warm day - the North East hitting highs of around 20 degrees is unfathomable.

I’m not sure if the ginger is natural, but it definitely suits her bubbly, infectious personality. Dressed in a simple black vest top and stone-coloured trousers, with her tattoos on full display, it’s no surprise Dragons’ Den’s Jenny Campbell called her “dazzling” in her 2018 appearance on the show.

This is why you might recognise Lizzy’s name. With her startup, The Sweet Beet, she pitched to the Dragons, asking for £70k investment with a 20 per cent stake.

She didn’t get it, but it wasn’t a defeat. In fact, the Dragons spurred her on to start doing motivational speeches, encouraging Lizzy to tell her story across the UK, pitching to universities and colleges. That’s why she’s here today, at Newcastle Startup Week.

Half an hour prior to this, she delivered the incredibly raw, emotionally uplifting speech, mentioned earlier, for the first day’s theme: inspiration.

I remember the entire room being stunned into silence and there were even a few tears, yet it’s evident Lizzy was doubtful about her place at the event: “I was sitting down and I was really struggling to understand what I was going to speak about to be honest.

“I even made a whole other slide, a whole other speech… [But] from people I’ve spoken to so far, they seem to have gotten a lot from it. That’s the whole point. It’s not about me, it’s about everybody else.” 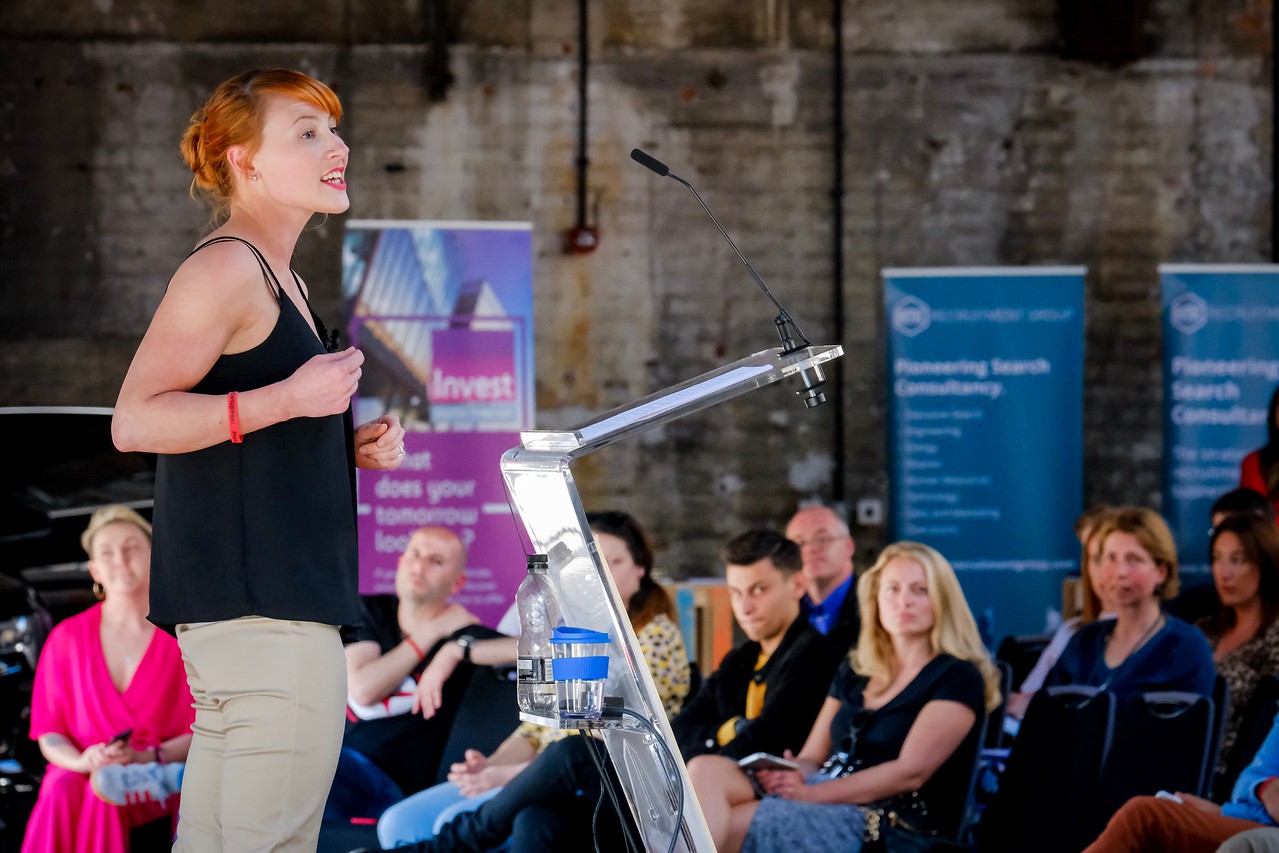 Lizzy captivated a full house at Newcastle’s Boiler Shop, delivering a poignant speech on stage against a backdrop of thought-provoking imagery and powerful instrumental. It just felt so natural, like she’s been doing this sort of thing all her life.

But that’s not the case. Lizzy, born in Scotland and raised in Texas by her divorced mother, hasn’t just fallen into the startup world by chance, presenting her best self. It’s taken a dropout from university in Newcastle (her dad is a Geordie), self-harm, rehab and many failures before realising her successes today.

But, as you know, every cloud has a silver lining: “I got into food [and setting up The Sweet Beet] because I was a chef first… It was just something I picked in rehab while I figured out what I needed to do next.”

Lizzy worked in hospitality for a long time following this, slowly getting better. But as she learned more about the industry, she realised there was a glass ceiling she couldn’t smash through, and she wasn’t being challenged enough. Instead, she began her own venture in the form of The Sweet Beet, which she describes as “liberating”.

And that’s not the only startup Lizzy has founded. In light of Mental Health Awareness Week happening now (May 13-19), it’s important to note that she has created Myndr, too, with her co-founder Emma Reilly.

In the summer of 2018, Lizzy was approached by Emma with the idea of Myndr, a platform to discuss mental health and self-care, trying to find a better solution to tackle the stigma of both.

“When Emma approached me and said I want to do something in the mental health space, I said count me in! From there, it’s just really helped me to get my narrative right and figure out something that can make a difference.

“I feel that, so many times, we are blurring the lines between self-care and mental health care. [We don’t] just want words of wisdom, [we need] something that people can do there and then.

“You take just the people that are here today, at Newcastle Startup Week, and the amount of knowledge that we have between us, and if you can figure out a clear and concise action plan for people to follow, I mean, that’s amazing on both sides.”

Lizzy first met Emma in 2016, when they were both taking part in the Natwest Business Accelerator programme. Despite them both having different businesses at the time, they bonded over their sadly poor experiences with mental health, especially as new business founders.

But the pair kept in touch and, now, Myndr has been funded by the Ignite Accelerator, a regional six-month programme for founders wishing to scale their business or seek investment.

As well as this, investment received from Nordstar has allowed the pair to really take time in doing their research, trying to figure out future goals and which direction they would like to take the business.

Speaking of the future for entrepreneurs, Lizzy says you have to just keep going with your idea: “After you get so many nos, and people tell you you’re the wrong person and it won’t work down the line, you start to look in the mirror.

“That’s a really tough thing to go through, it’s been a tough journey… We always underestimate how liberating it is to just shed everything and go: this is me. Hold your head high a little bit longer.”

Keep going with your startup, your business, whatever it is you’re passionate about, and keep the whole getting naked on stage thing metaphorical. Always.